This week I have been at Disneyland in Paris for a conference called the Technical Leadership Exchange where several thousand geeky types come together to share knowledge and get insights into interesting developments in the industry. A very important aspect of the event was to network and socialise with colleagues from around the globe. In order to organise such a large group of folks, we all had a colour coded dot on our name badge. They then correspond with the instructions on these Posters which were displayed all around the theme park. Imagine my concern when I looked at the option for my red dot. I've been to some odd networking events in my time but this seemed a bit strong. Hello cowboy. 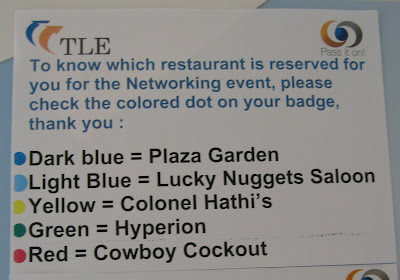 So it was with no small amount of relief that when we got to the designated spot we found that there had been a spelling mistake and we were simply having a BBQ. 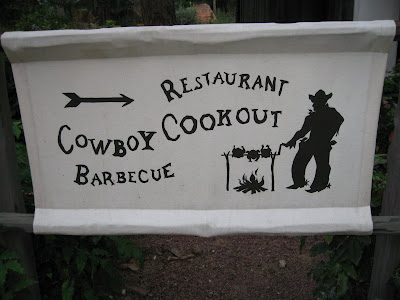 My frolleague Matt has been trying to persuade his young sons that his trip to Disneyland in Paris is for work and he will not be having a good time at all. I'm not sure that this picture is going to help his case. 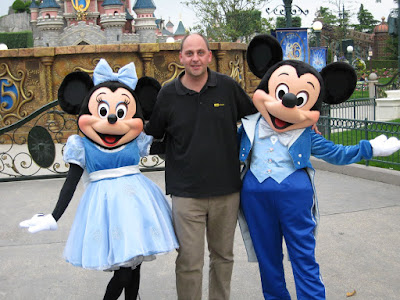 Recently our National postal system, The Royal Mail, introduced a new set of pricing that for the first time took account of the shape of an item as well as its weight. They claim that this is in line with the rest of the industry (Fedex, DHL etc.) Today I saw for the first time how petty and stupid this system is. We got this card in the post claiming that they were unable to deliver an item because there was insufficient postage. Fair enough I thought. It did say that there was £1.06 to pay. Was someone sending me gold bullion without putting a stamp on it? Then I noticed the killer line "includes £1 handling fee for underpaid items". So actually the postage was just 6 pence short. Seems a bit petty. Of course we didn't know what the item was at this stage. 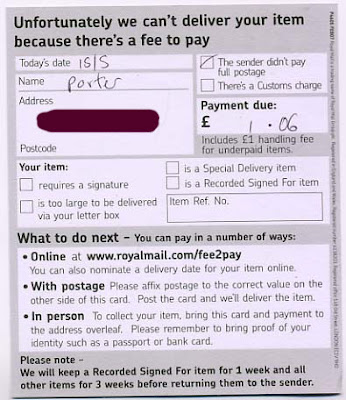 One option was to take half a day off and go to the sorting office to retrieve the item - which seems a bit extreme for a 6p under payment. The alternative is to attach £1.06 to the card in stamps and send it back and they will deliver the it. Now these days people only buy 1st class stamps which have a value of 34p. Attaching 3 1st class stamps would only make £1.02! So we would need to attach 4 which means we are now being charged £1.36 for the 6p underpayment. Of course you can still buy smaller denomination stamps - but you have to go to the Post Office to buy them - somewhat defeating the object.

So what was this object that had caused all the fuss? Simply a congratulations card for Lucy with a first class stamp on it. Should be fine right? Well if you check out the new regulations it turns out that the card was 5 millimeters too long. You are allowed 240mm and this is 245mm. I bet some despicable jobsworth is really proud of themselves. 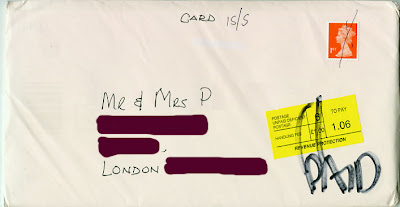 Email ThisBlogThis!Share to TwitterShare to FacebookShare to Pinterest
Labels: Rip Off, Royal Mail

I have supported Manchester United since I was 9 years of age. I went on a school trip to watch the 1977 FA Cup final at Wembley between Man Utd and Liverpool and encouraged by some school friends, decided to support MUFC. As luck would have it they beat their scouse opposition to win 2-1 so my support started off with a flying start. Although the rest of the seventies and the eighties were pretty lean pickings with just a couple of FA Cups to show, the nineties and naughties (otherwise described as the Alex Ferguson era) have been pretty successful.

Obviously once you support a club it is with you for life. Through the good times and the bad times. You can't just pick and choose. Unless your my wife Ali. She started off supporting Brentford FC because her first football match was at Griffen Park. However, as soon as Chelsea started being successful she dropped the Super Bees like stone and started supporting Abramovich's plaything. Just because her best friend Lorna is a (proper) fan of the Blues.

So what team will Lucy support? Well if Ali had stuck with the Bee's I might have allowed her to become a Brentford fan. But since her appalling defection I cannot allow Ali to influence Lucy's football choice in way - so I have had to take matters into my own hands. Especially because Lorna is coming over to our house to watch today's FA Cup Final between ManU and Chelski. 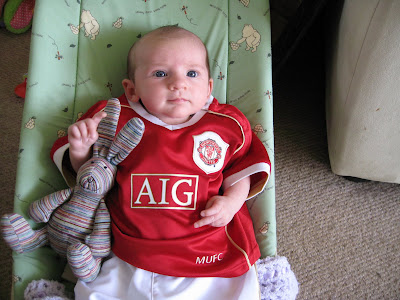 Obviously Muji rabbit will support United as well. Here is the full kit - still with a bit of growing room (it is meant for a nine month old!) 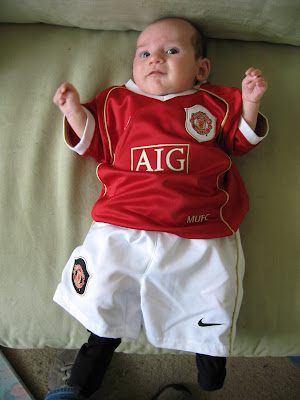 She still needs to get a bit bigger before she will be running around the park with a ball at her feet. 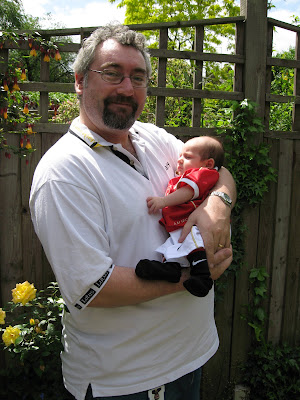 I love my little digital camera. It is a Canon Ixus 40. Ali bought me it for my birthday a few years ago and it has turned out to be one of the best presents ever. It is really simple to use - just point and click - but produces excellent pictures. Also the fact that it is so small pushes it into the cute gadget category. Finally, the way it synchronises the pictures with the computer is effortlessly simple and well designed. 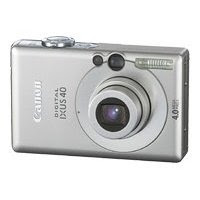 Sadly it is time for an upgrade. Despite it's many good points the camera is starting to show it's age. 4 Mega pixels seemed like massively high resolution when we upgraded from a 1 MP camera - but now it just isn't enough. When you try to enlarge bits of pictures it is a bit grainy. But the worst sin of all is that it has started to get a bit unreliable. Sometimes it will just switch itself from still into video mode. At other times when you turn the flash off it will turn it back on. This can be quite a shock for a five week old baby as you can see here!.

There are so many capable compact digital cameras around there days that you are spoiled for choice. But as luck would have it, my mate Marcus had just bought himself an Ixus 900Ti and highly recommended it. I was a bit dubious at first. Do I really need 10 Mega pixels? Well I'm glad that I took the plunge because the 900 is a fantastic bit of kit. And what is best about it is that it works pretty much exactly like the Ixus 40 except just a bit better in every area. Bigger screen, better focus, more capacity, more control and most important - new and shiny. 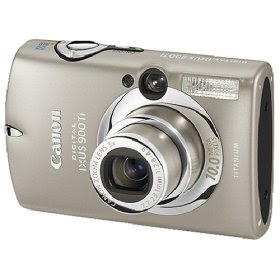 When Boo grabs the premium spot on the chair - Barney knows his place. It's like a bunk bed for cats. And everyone knows that the top bunk is always best. 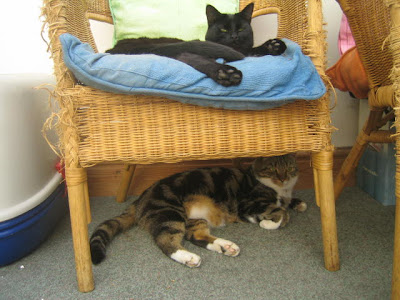 I was in a hotel in Vauxhall, London yesterday for an event about collaboration which I was speaking at. It was a fantastic event and I think my presentation was quite well received. To top it off the hosts The Butler Group put on a smashing Gala Dinner afterwards.

After the dinner my frolleague Matt and I headed round to the bar for a glass of wine before heading home. I was not surprised to find that 2 standard glasses of house red wine was more expensive than a normal pub or restaurant. £4.70 for a very ordinary wine is a bit steep - but what do you expect in central London hotel? 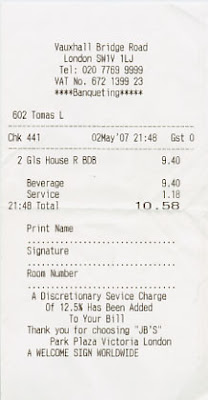 Well what I wouldn't expect is for a 12.5% service charge to automatically be added on top. For pouring an overpriced drink into a glass! Even in cultures like America where, unlike the UK, tipping is expected it would never be automatically added in a bar. At least never anywhere I have seen. Thieving swines. And the wine was rubbish.
Posted by Mr Ports at 8:21 pm 2 comments: