My mate Matt sent me this cartoon which has been doing the rounds on the Interweb. If you have a cat you will know how accurate it is. Specifically it is Boo.

Email ThisBlogThis!Share to TwitterShare to FacebookShare to Pinterest
Labels: cats

Fit as a fiddle

A few months ago I was down at the Doctors getting an MOT. I was obviously feeling quite smug having given up smoking cigarettes over two years ago and figured that I would pass with flying colours. I was not unaware that I weighed slightly more than was ideal and that I occasionally slipped over the recommended alcohol limit. Neither had my fondness for cheese and roast dinners escaped me. But I was rocked to the very foundations when the Quack explained that I suffered from "being fat".

What's more, the medical profession has devised a new and hideous treatment for this ailment. Apparently it is called "exercise". I asked for a second opinion but he would not be shifted. I was sentenced to a regime of "Gym" attendance and "dieting". 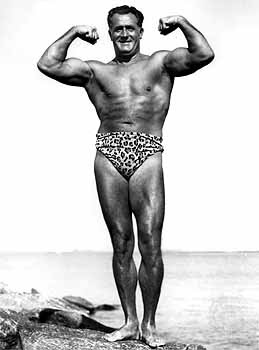 I can't say I have much enjoyed hauling myself to the gym twice a week, but I had my three month assessment yesterday and it appears to have done some good. I have lost about a stone in weight, my resting heart rate has dropped by 12 bpm and my flexibility has gone from 33cm to 46cm. Whatever that means. Cutting down on the booze and cheese was hard at first but I haven't exactly turned into a Monk.

So a very symbolic but also slightly sad day today. Ali is returned to work and that means that Lucy will be spending her week days with a child minder. I've been working for the last six months so this isn't a great change for me - but it is quite a wrench for Ali who has spent just about every waking hour with the little fella since she was born. 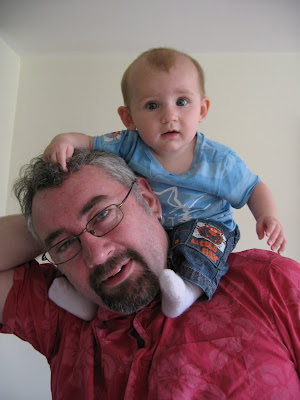 Our child minder is lovely and clearly adores children. We know that Lucy will have a great time with her and fortunately she just lives round the corner. We have checked her impeccable ofsted report and talked to her awesome references. But the fact is that she could be Father Christmas and we would still feel a bit guilty about not being able to look after Lucy forever.

But wages need to be earned because the mortgage needs to be paid (the banks seem very insistant on this). I'm sure that this is just the first of the many difficult things that we have to do, for instance I'm not looking forward to explaining why she can't have a pony. Anyway, it will always be nice coming home from work knowing that we can give the Spocket a big huggle.
Posted by Mr Ports at 5:08 pm No comments:

I have a fantastic computer (as you might imaging given what I do for a living) and I have ripped all my CDs onto it giving me a reasonably impressive music library (if you are impressed by Marillion and The Sisters of Mercy). However, I have been struggling to find an easy way of listening to this fine library of sound anywhere else, for example in the garden. In the past I have put a guitar amp in the garden and draped a long lead out of the living room window to connect it to the computer, but the sound is not great and the aesthetics are worse. Of course I could just feed CDs into a ghetto blaster but that is soooo 90s!

I knew there must be a better way but I couldn't find it. There are systems like the Sonos which will enable you to play music in every room in the house but an "introductory" pack to get two rooms going romps in at nearly £1200. That is a bit steep for listening to "The Temple of Love" while munching a burger at a BBQ. You could virtually hire the band for that.

I also looked at devices like the Squeezebox and Transporter but again, starting at £200 they were just over engineered and over priced for what I wanted. I was starting to think that perhaps I just wished for a product that simply didn't exist. Until I came across these fellas yesterday. They are AQsound Wireless Speakers from the appropriately named I want one of those.

As you can see from the pictures, they look mighty fine sitting there in the garden pumping out a bit of Oasis. 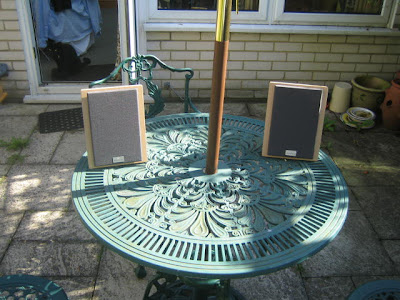 Obviously, no wires in sight. They run on 6 AA batteries each. This enables them to be very loud with great sound quality. They have a claimed range of 100 meters. I don't know if that is true - but they still worked with no sound degradation at the bottom of our garden. If you are worried about them eating through too many batteries then they come with an adapter for each speaker as well so they can be powered from the mains. 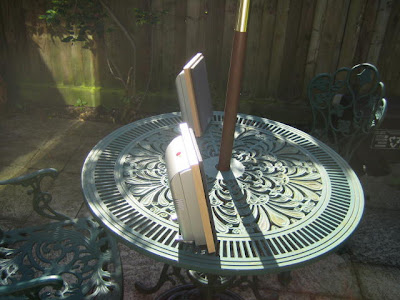 All you need next to the computer is the wireless box (the little silver space ship thing in the middle) that plugs into the headphone socket. Smart. Of course this could also be used with a hi-fi, iPod or any other noise creating system that has a output socket of some kind. 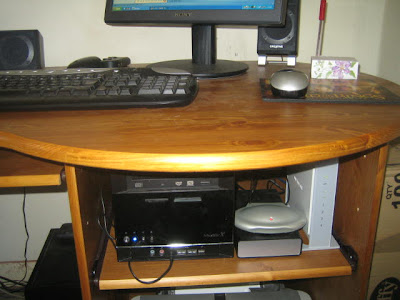 Over all, very highly recommended.
Posted by Mr Ports at 3:33 pm 4 comments:

Email ThisBlogThis!Share to TwitterShare to FacebookShare to Pinterest
Labels: aqsound, I want one of those, wireless speakers
Newer Posts Older Posts Home
Subscribe to: Posts (Atom)