Life After Death by Powerpoint

Geek, engineer and ex chip designer Don McMillan has some pretty funny observations on how not to construct slides and present. In fact in 4 hilarious minutes he gives more and better advice than I have seen in many formal presentation skills courses.

With his wit and insight I can see why he dumped designing processors and swapped it for performing corporate comedy routines. Here is some more of his stuff.
Posted by Mr Ports at 1:19 pm 2 comments:

Last week I was very much looking forward to the final of The Apprentice. Alan Sugar might be a touch fond of himself and the candidates are mainly scheming ego maniacs but it is brilliant TV. I knew the challenge this week was for the two finalists to redesign some building that Sugar had bought near Waterloo. I nearly fell off the sofa when the program started and they showed the building! It was IBM Southbank - somewhere I typically work out of a few days every month.

It turns out that IBM's lease on the building has many years to run so all that has really happened is that we have got a new landlord. But next time I'm in the office I will check that we have still got IBM Thinkpads and not an Amstrad PCW 8256. I also need to check that our fine Cisco IP Phones haven't been changed for E-m@iler phones that only exist on Sugar's secretary's desk and in his boardroom.
Posted by Mr Ports at 4:10 pm 3 comments:

Email ThisBlogThis!Share to TwitterShare to FacebookShare to Pinterest
Labels: IBM, Southbank, The Apprentice

Safari not so goodi

So at last Apple have ported their quirky Safari Web browser to Windows. It is great to get another browser into the market to further promote choice and innovation. Astoundingly Steve Jobs claims that this will trigger another browser war - and that Apple is aiming for the 15% of the market that Mozilla currently holds with Firefox. There would seem to be a more obvious target!

Obviously Apple claim that Safari is "The world's best browser" but this hasn't been backed up by my experience with it. Firstly, just like the horrendous iTunes, it has the ugly gun metal grey header and menu bars which take no account of any Windows theme and so clash with everything else.

But that is just cosmetic so do I have any more substantive criticism? Well Apple claim that it is twice as fast as IE and 1.7 times faster than Firefox - but that hasn't been my experience. It seems about the same. They claim that compelling reasons to move are things like Popup blocking, inline RSS and tabbed browsing. Not really anything new. They also state that "Security" is a reason to love it - perhaps they should have done a bit of testing first to avoid this type of egg on the face.

The biggest problem however, is that it keeps on crashing. Of course a new browser on the scene isn't going to render every page perfectly first time and it is still in Beta testing cycle - but I'm afraid I'm finding that it falls over so often that is is unusable. As my frolleague Darren Adams would say, it is about as stable as Paris Hilton juggling cats on a pogo stick.

Interestingly when I analyze the traffic to mrports.com I can see that 4.63% (2466) of visitors use Safari whilst 8.83% (4698) of visitors are using Macs. Demonstrating that just under half of the Mac users are not using Safari. If these Mac users are rejecting Safari it can't bode well for its invasion of Windows. Less of an Apple, more of a Plum?
Posted by Mr Ports at 4:34 pm 4 comments:

Now I don't want to come over all Alf Garnett but every family has to have rules. This might involve the attitude of the toilet seat or who is responsible for taking the trash out. Likewise cooking duties may be up for debate and loading (or unloading) the dish washer tends to a matter of contention. But there are some rules that are set in stone and one of those is the ownership of the remote controls. If ladies are accidentally given the remote controls that rightfully belong to blokes then they could inadvertently select "Desperate Housewives" or "Ugly Betty" when "Top Gear" and "Police, Stop, Crash, Argh!" would be more appropriate. It might sound patronising and misogynistic but it is for their own good. So imagine my horror to see my beloved 9 week old daughter with her hands on the crown jewels! Doesn't she know the rules! 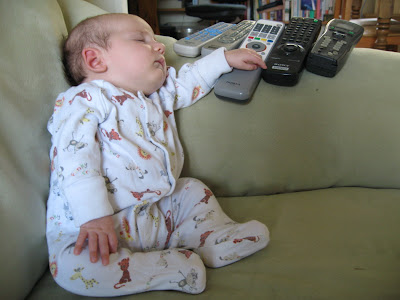 (Note to Idiots: Please don't think I'm being serious! It's just a cute picture and I'm being cheeky)
Posted by Mr Ports at 12:48 am 8 comments:

My frolleague Ed Brill started sharing some of his presentations on Slideshare a few months ago. You can read his incredulous reaction here. Over 5,000 folks have viewed his presentations. Mainly because a) he can knock up a good slide show and b) the Lotus technology he advocates is pretty damn smart.

Anyway - I have decided to do the same. There are 3 presentations that I use every day. And virtually everyday I am asked to send these slides to the customer I have presented them to. So perhaps it is time that I just make them public. So if you are curious about what I do for a living then check our My Slides. I hope that I add value to the slides when I present them. That's why the jokes aren't on the slides ;-).
Posted by Mr Ports at 1:42 am No comments: