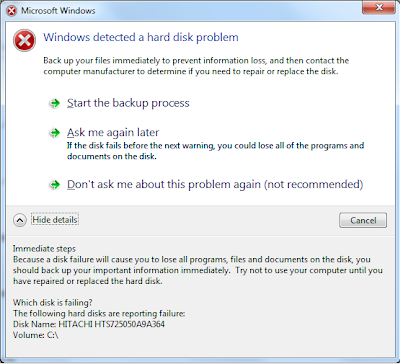 So it turns out that the problem was a failing disk drive. Not something I would expect on such a new machine. Hitachi doesn't publish a Mean Time Between Failure (MTBF) for the Travelstar 7K500 but it just goes to show that MTBF does not mean how long a drive will last but rather the average. So be warned and never be complacent. Drives can fail at any time. So make sure that you have a good backup. Fortunately I backup my important data to multiple locations (Home Network, Backup Thinkpad) and my really important data (customer presentations) to Lotus Connections Files/Lotus Quickr Places. So it will be very straight forward to rebuild this machine when my replacement drive arrives.
Posted by Mr Ports at 7:46 pm 9 comments:

As you may know IBM has for many years been providing the technology for the Wimbledon Tennis Championships (as well as many other sporting events). This includes the Wimbledon web site which is awesome and there are now apps for both iPhone and Android to keep track of results. In an effort to help IBMers keep track of what is going on in the Championships while they are using their favorite collaboration application, IBM has deployed a Lotus Notes Widget called Wimbledon Sideline that allows everyone that is using Lotus Notes 8 and above to see what is going on in real time displayed in their sidebar. Very nice. (clicky for bigger).