I still remember being 16. I quite distinctly recall my clear understanding that anyone over the age of 30 was utterly pointless and totally incomprehensible. In fact Logan's Run should have been a documentary rather than a film. Myself and my best mates Matt and Phill used to spend hours plotting the downfall of the fascist Thatcher government, being proud Yorkshiremen supporting the Miners Strike (despite not really knowing what it was about), worrying about our untimely demise by atomic bomb due to the Cold War and generally setting the world to rights. However, perhaps the principal focus of our attention was the general desire to beat the system and resist the corrupt and cynical grasp of "The Man". OK, perhaps our principal focus was actually on girls and our seemingly endless quest to gain the attentions of one - but after that it was beating "The Man". Our future plans mainly revolved around our inevitable successful career as rock stars (our band was called The Strangled Wombats) whilst simultaneously writing worthy but witty novels and moonlighting as peace campaigners for CND and humanitarians bringing parity and fairness to the Third World. In short we were stupidly idealistic, impossibly opinionated and of course girlfriend less.

So what would my 16 year old self make of me now I have hit 40? I guess he would see me living with a huge mortgage in a twee suburb of London and think I had been a traitor to my Yorkshire roots. He would bristle at my "ostentatious" BMW since it is "Only a badge and that car could buy a house in Hull". I'm quite sure that he would be disappointed that the music career didn't pan out but disgusted that I ended up working in IT and worse still for a behemoth like IBM (perhaps softened by the fact that I work in the cool Lotus bit). I guess he would be ashamed that I had followed convention and got married rather that just "living in sin" but be secretly relieved that I had a kid since that showed that he was definitely going to get a shag sometime in the future. I'm sure he would be baffled that I spend money on white goods but quite chuffed to see I have a garden shed. And he might even like the goatee beard. But probably not. 16 year olds are a very difficult crowd to please.

Fortunately I don't judge myself like Mini Me. In fact I'm well happy to be 40. So happy I had a party with my twin sister. This was the invitation (don't worry if you didn't get one - the room was limited to 90 people for fire regulations - so not being invited doesn't mean I don't like you. Necessarily.) 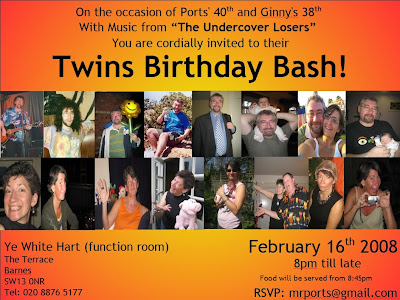 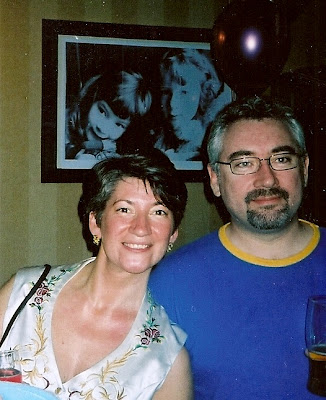 This was the band that played the party. They are called Beautiful Losers (clicky clicky for Myspace Page). They rock! 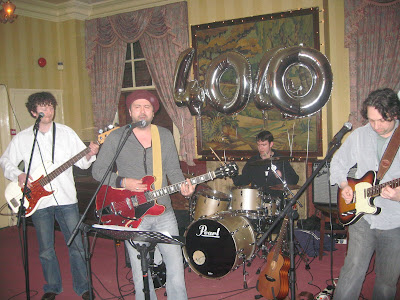 Here I am approving of the band. 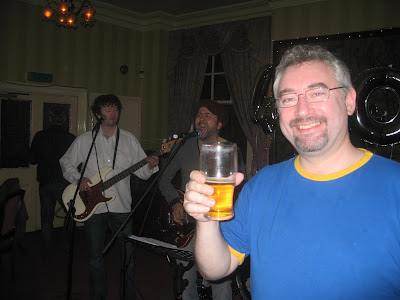 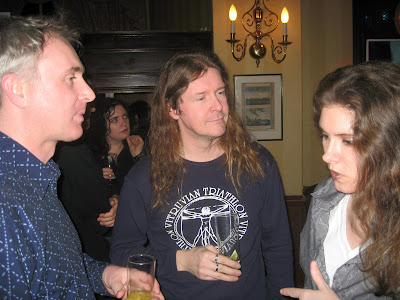 This is most of the legendary indie rock band Angelfield. Lynne, Ian and Brian. Brian gave me a birthday card with a cartoon stegasaurus saying "From one dinosaur of rock to another". Respect :-) 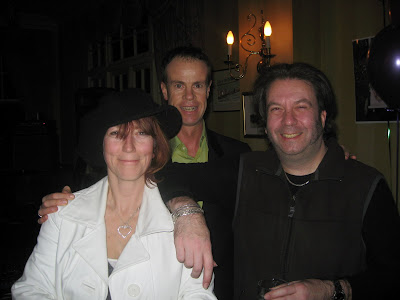 Here are Helen, Pete and Alexis. 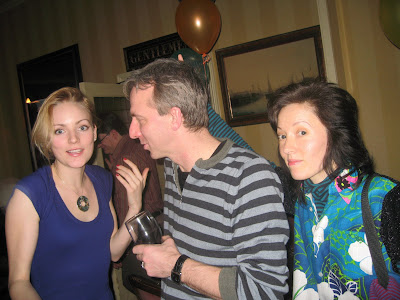 Ali (with the bag) talks to Simon and the band at the bar. 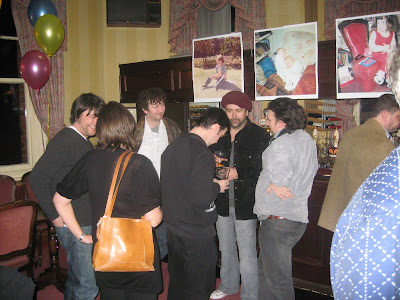 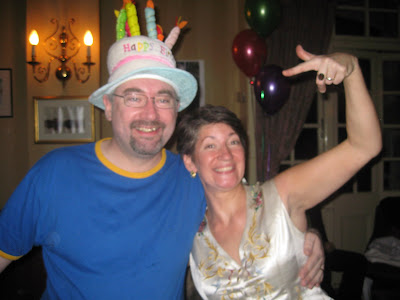 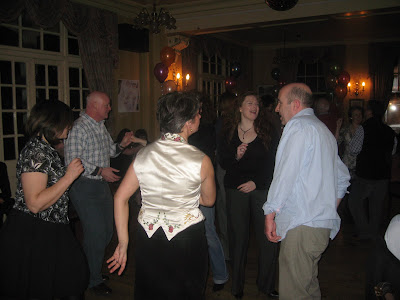 Me and my idealistic foil Matt may have moved to London and forgotten our idealistic past but at least we both have cool goatee beards. 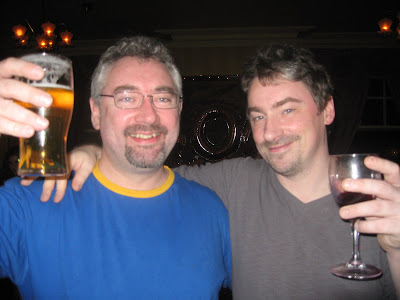 And despite what Mini Me might have though - being married is pretty cool ;-) 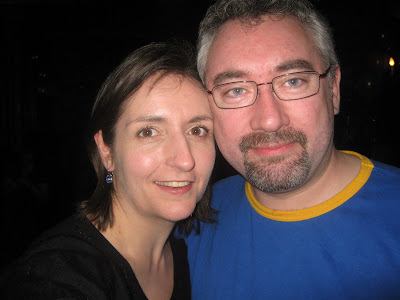 Weren't they the Undercover Losers?

It's the same band. They are called Beautiful Losers but go by the cunning pseudonym of Undercover Losers when they are throwing in a few cover versions like at a party.

... and by the way, the cute black & white photo of your sweet little selves was taken by Aunty Pam, not by yer Mum ... still insanely adorable, though!

"Eats shoots and leaves" error on your part I'm afraid. Who took the picture of Pink and I in front of Aunty Pam's picture? It was Mum you doofus! Read it again.

Ok, ok, I'll grant you that one ... the ambiguity quotient is high in the caption, but I'll take that 'doofus' on the chin.

Sorry for being off topic but I thought you might know...I searched around but couldn't find anything....

Hopefully this should sort you out

Helen looks cute, is she single?

Unique blog post. Your analysis is quite nice and also convincing. I think you should do more research regarding the subject. Blog is fully unique and excellent information,