I love a gadget me. I mean I really do. The problem is that there are so many of them but none of them are quite good enough to make the others redundant. This means that on any business trip I carry 5 gadgets. An iPod Touch, A Blackberry Pearl, An AT&T Tilt, a Samsung SGH-U600 and my trusty T61p Thinkpad laptop computer. 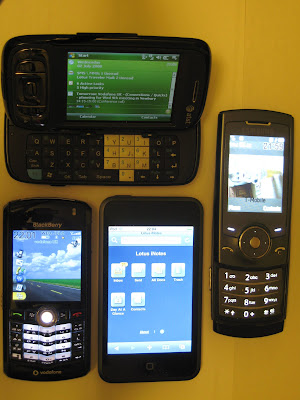 The iPod may be thought the poor relation to the iPhone but is it a better media player because it has more memory (32Gb) and is significantly thinner. Of course all the other devices can play an MP3 but they cannot sync with podcasts with anything like the straight forwardness of the Apple device. Also none of the others can so seamlessly integrate with my jalopy when I want to listen to audio books on long trips. Of course it has built in wireless networking so I can access my mail and calendar using the forthcoming Lotus iNotes Ultralite in Domino 8.5 as well.

Talking of email on the move, the Blackberry is very much the vogue for secure enterprise messaging and is indeed an excellent device for syncing with Lotus Domino mail. But the fact is that it isn't really a full PDA and despite what the fan boys say, the keyboard is a challenge for someone with sausage fingers like me. The real limitation for me is that it doesn't support wireless networking.

The AT&T Tilt (HTC TyTN II) on the other hand is a proper PDA with full Windows Mobile capabilities. Again I can access my Lotus Domino email and calendaring using Lotus Notes Traveler. Also it supports both GPRS or 3G dialup and wireless networking. Lotus Mobile Connect VPN software makes a pretty good job of ensuring the most appropriate (cheapest) service is always used. The slide out keyboard is also pretty good. The downside of this device is that it is about the size and shape of a house brick.

The Samsung may seem a little light in functionality compared to these super gadgets - but that is the point. It is my personal phone that I keep with me all the time and the most important attribute is that it is small and light so it can hang off my belt without making me look like a Star Trek nerd.

So my real challenge in life is not connectivity or functionality - its big pockets in suits!
Posted by Mr Ports at 10:19 pm