A bad day for Barney and Boo 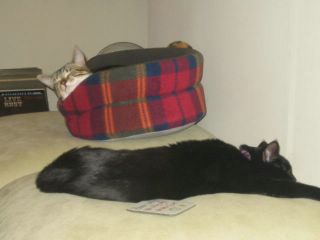 Here is a picture of Barney and Boo being carefree and frankly quite lazy. But they weren't looking like that today. Firstly they were a little tetchy this morning because we didn't give them any supper last night. Obviously they moaned a bit but nothing spectacular. However, their combined meows reached something of a crescendo when it became apparent that they weren't getting any breakfast either. This was replaced with a horrified whimper as in one fluid movement we scooped them up and popped them in their cat carrier. And well they might whimper since we were taking them to the vets to be neutered.

Neutering boy cats is very routine these days but even so it is an operation which involves a general anaesthetic so we were a little concerned for the wee tykes but they were fine. The most amazing thing was finding out that Barney weighs 10 pounds and he is only 7 months old! He's still got another 3 to 5 months growing to go. He'll be a horse. Anyway, when we got them home it was much fussing over them together with a full packet of Whiskers treats each to bribe them into liking us again. I shouldn't laugh bit it is funny watching them walking about the place like John Wayne. And the good news for the boys is that we can now start letting them outside without worrying that they will impregnate half of South West London now they have had their love spuds whipped off.
Posted by Mr Ports at 11:59 pm

A bit on the harsh side for chewing yur wiring!