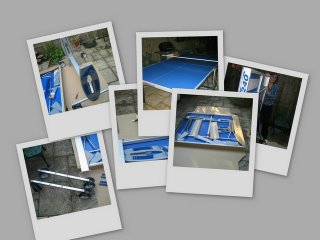 Blimey! As I wrote a couple of posts ago, I had a nightmare getting hold of our new Table Tennis table due to the incompetence of Argos-Sport.com. Still, it arrived a few days ago and I decided to forget about the past and live in the present. The instructions seemed pretty straight forward and it even helpfully stated that it would take just 45 minutes to build. I should have guessed that things were not going well when it took a hour before I realised I had the wrong screw driver :-( How was I to know that a Pozidriv Screw Driver is different to an ordinary Phillips? Here is the evidence. Anyway, with Ali's help I managed to get it constucted, but as you can probably see from the photo's - by the time it was built it was too dark to play :-( And not only that but those cheeky Argos scamps had out done themselves by forgetting to include a few parts as well.

As luck would have it, I was then very busy for the rest of the week so still didn't get a chance to have a play on our new table! But I knew that the weekend was coming so not to worry. And what happens on Saturday? Rain all bloomin day. Bad luck doesn't last forever though and this afternoon Ali and I got to have a couple of games. It was fantastic but just as we were emulating Chinese olympic team - it started raining again. When does summer start?
Posted by Mr Ports at 12:10 am