Last week I met up with a whole group of frollegues at the annual IT Specialists Institute in Nottingham. It is a chance for a load of IBM propeller heads and geek types to come together and "network". The idea is to speak with folks who work outside your usual sphere of interest to broaden your horizons and expand your mind. As a result they employ every trick in the book to try and get people talking. This obviously starts with opening a bar to get the social barriers down and then following that with giant games like Jenga and Connect four. It isn't as lame as it sounds.

Anyone who has been on any kind of teaming event will recognise the next trick. After dinner, an envelope of "bits and pieces" was left on each of the 20 tables. Instruction on the envelope showed that the aim was for all the people on the table to work together to construct a self propelled floating vessel. Of course everyone on our table cynically mocked this task until it became apparent that other teams were really going for it. Unfortunately by the time we decided to take it seriously there were only four of us left. So our diminutive gang was Cali, who works with Content and Document Management systems (and who also knows every fact in the world), Stu who work with Portals for Banks, John who works with security and finally your humble correspondent. Not a lot of boat making experience here. Looking round the room it was apparent that most teams were attempting to use either balloon power or rubber band energy to power their craft. The problem was that their inventions didn't look very much like boats.

So we decided to keep it simple. We made the hull by cutting the envelope with the instructions in half (since it was already sealed at either end) and then put a mast into it with a piece of A4 cardboard for a main sail. A couple of corks taped either side and a plastic dinosaur attached to the mast and our mighty vessel was born. It had taken close to 10 minutes. We were far from confident that it would even float, never mind go anywhere. 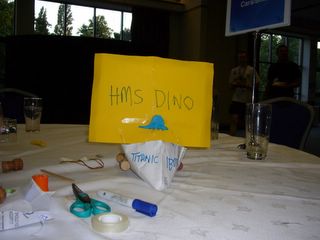 Our propulsion system came from Stu and I waving a couple of laminated table labels. There were various whinging complaints from other teams because they claimed ship wasn't self propelled, but the judge quite rightly dismissed their pathetic moans. How can using wind not be self propelled? To our amazement HMS Dino actually worked and didn't sink. Each of the 20 tables had to see how far they could get their ship down the paddling pool. With herculean wafting with our place labels we managed to create enough wind to get Dino all the way down to the end which put us in a semi final sail off. We were stunned to win the semi and as you can see below, went on to win the final. Even though it was just a laugh, it felt really good to win and Stu, Cali and I were whooping and hollering like a flange of baboons. 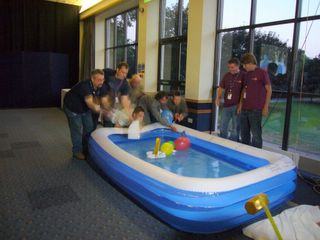 The Spoils of War. We actually won two bottles of quite nice Champagne to share with the whole table. Of four people :-) 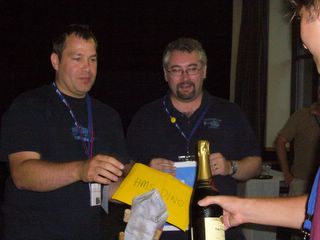 As a result, as a substitute for examining the featherweight carriers simply because a tough time, use chanel replica bags. Immediately turn them all inside a product alot more exquisite and even excitement. That plants roots belonging to the Designer House hold Prada will be tracked into 1913 once Mario replica chanel initiated constructing and even retailing affordable handbags, boots, trunks, and even bags nonetheless a few shops on Milan through patients spanning Eu and even the us .. The unique replica burberry bags Unsecured personal bags was each of those tropical and even different to look at. Comprised of quite heavy walrus body that advance in flights given that the more popular fake chanel in travelling made that quite heavy and even heavy Prada bags outdated. At that point Prada initiated constructing alot more helpful bags and even accents by using ideal and a lot more superb leathers. On 1978, Mario's granddaughter, Miuccia Prada, went on with the small business. Miuccia is an important chanel replica handbags mime and a second precious time Communist just who possessed paid six quite a few years their studies at Milan's Teatro Piccolo, and even possessed an important PhD on politics discipline.