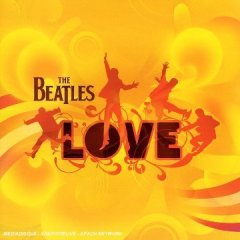 I'm down with the kids. I know what teenage language they use. "Ah rite. Dem is bangin' beats is it.. " etc. Some of the music these little tykes listen to now is pretty sweet. I love Kaiser Chiefs, Kasabian and the Arctic Monkeys. However, every now and then one has to go back to the originals and by that of course I mean The Beatles. A new album has just been released called Love. Initially it could be viewed as the sound track for a new Cirque du Soleil show in Las Vegas, but after a single listen you realise that it is far more than background music for the Canadian Trampoline Monkeys. It is "fifth Beatle" George Martin revisiting some of the fab fours greatest music. Across it's 26 tracks there is the occasional disappointment, why would you take the guitar solo off "While My Guitar Gently Weeps"? but mainly it is a revelation. With his son Giles, Beatles producer Martin using only the original recording has produced an astonishing reinterpretation of the originals. The guitar riff from "Blackbird" gets bolted onto the front of "Yesterday", "Within You Without You" get's mashed up with "Tomorrow Never Knows", "A Day In The Life" gets top and tailed by "I Am The Walrus". And so it goes on. It is stunning how well, after a bit of spit and polish (remastering), the original recording stand up forty years later. Oasis would be proud to release most of these tracks as single tomorrow. But this album also goes to show quite how significant George Martins contribution to The Beatles was. If you enjoy curling up with some croissants, a pot of coffee and the papers on a Sunday morning/afternoon then this is a perfect album to accompany it. And don't worry if some kids shout "take the shame" when you leave the record shop with this fine record/cd/download under your arm. We know that if it weren't for The Beatles the kids would still be listening to Cliff Richard and Buddy Holly.
Posted by Mr Ports at 12:08 am

I was puzzled when this CD came out. I was thinking how could they come up with new songs? Perhaps it was unreleased songs from decades away. But, it sounds like you are saying that they are "remakes" of old songs. Regardsless, I can't wait to get it.

Hi Rob, yes you are spot on. There are no new songs here. But they aren't exactly "remakes" either. That implies some sort of cover version. I suppose you would have to say that they are "remixes" but only using the original parts.

Hmmm. When I read that paragraph is sounds kinda pedantic - so let me give an example which I hope will be clear. Ringo was never the most confident of drummers and so he hated playing drum solo's. However, on this record they have taken the excellent drumming he did on "The End", isolated it and used it as a drum intro to "Get Back". And it works perfectly.

So it is original and modern at the same time.

Magnificent blog post ! I truly like this; I have learned a lot of things. I think everybody can go and see.