I have always liked the idea of Apple. I like the way that when IBM's motto was "Think" they made their motto "Think Different". I like the fact that when Microsoft stole all their ideas (e.g. Windows) they didn't just complain like so many of their long gone competition, they came up with some better ideas. I like that they always seem to be a step ahead of the rest. But more than anything else, I like it that Apple don't just make beige boxes that do accounts they make beautiful objects of desire. Having said all that, I have never owned anything by Apple.

Since I have started going to the gym I thought that perhaps this was the time to take my first faltering steps into mobile music. I had been tempted by an iPhone until I discovered how draconian the restrictions were (O2 only, 18 Month Contact, No 3G etc.) so the obvious candidate was the iPod Touch. All that is good about the iPhone, except without the phone.

I have to say that my first impression of the Touch was awesome. Even the box it comes in is a work of art (Except for Macy Gray on the cover - her music sounds like an Alligator gargling). The Touch itself is extremely slim but weighty enough so it doesn't feel dainty. The first disappointment is that I can't do anything with it until I have connected it to iTunes.

The second disappointment is that iTunes is a disgrace. Having downloaded the software it would not allow me to proceeded until I had given it my address and credit card number. I know muggers who make less demands on their customers. I have bought a media player yet it is forcing me to be a record shop customer. Absolutely disgraceful and I now start to see where some of the criticism of Apple comes from. That is not to mention the fact that it crashed my PC several times. And it is also about as intuitive as Latin. In braille.

This myth that Apple software is easy to use really is a myth. It is pathetic. However, if you search on the web you will find loads of good people railing about the evils of iTunes so I won't waste more time ranting about it any more here other than to say that iTunes stands in stark contrast to the excellent software on the Touch.

I have previously commented on the Web browser Safari being a bit rubbish on Windows but on the Touch it is a revelation, helped by the ease by which you can enable wireless networking. Being able to access You Tube is less useful but still quite amusing to show friends. 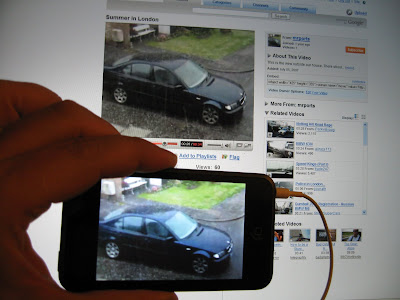 Getting back to using the Touch as a media player it is very good with the basics. Music played pretty well and it automatically picked up most cover art to make the "Album Flow" interface work well. Likewise I could download a few videos and TV Shows after I had converted them from .mov to .m4v format. I was disappointed that other videos and DVD's didn't want to transfer even though they were all legitimate. The curse of DRM.

The other major suprise was how crap the built in headphones were. I would have replaced them anyway since white earbuds just scream mug me, but the sound quality was awful. A pair of discrete black in ear Sennheisers has cured all that though.

The final addition was a Griffin iTrip. The current jalopy doesn't have an iPod connector so the iTrip allows the Touch to become a radio transmitter which can be picked up by the car radio so I can listen to all my new podcasts as I dive. Neat.
Posted by Mr Ports at 5:26 pm

handbrake is your friend when it comes to converting the dvds/mpg etc - it even has an iphone output template.

I used it to convert the wifes 50 million hours of Poirot dvds (perhaps i just imagined it was that long) and she watched them on the plane to and from our recent holiday, the quality of the touches screen was vastly superior to the screen in the back of the seat.