A build number can be a quite interesting things in software. It represents the number of times that a computer program/suite has been assembled and compiled up to that point. Lotus stopped bothering with build number for Notes and Domino years ago because we normally have several versions that are being built at any one time (currently 6.5.x, 7.0.x, 8.0.x and "Next") and they are often built more than once per day. So we tend to go with build names that are version and dates - so I am currently running Notes V801_11152007. However, Microsoft has continued using build numbers for Windows and they have a sort of iconic status for Softie geeks. Windows NT 3.1 was build 528, NT 4.0 was build 1381, Windows 2000 was build 2195,Windows XP was build 2600 and Windows 2003 was build 3790. You can probably see why geeks make such delightful conversationalists at dinner parties. 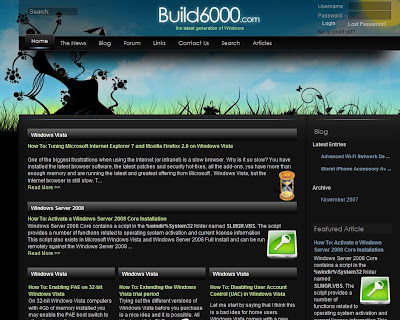 Anyway, my mate Marcus is a royal expert on all things Windows and has set up the definitive resource for folks who are trying to find out about Vista and Windows Server 2008 and above. Not only that - but he has gorn and nabbed the domain name Build 6000 because that it the build number of Vista! Clever or what! The site is designed to embrace all the social side of stuff and become a community area so there will be blogs, forums, articles, links and such like as it develops as well. It is brand new though so bear with any teething troubles.
Posted by Mr Ports at 4:34 pm