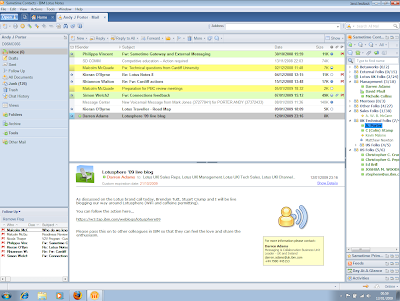 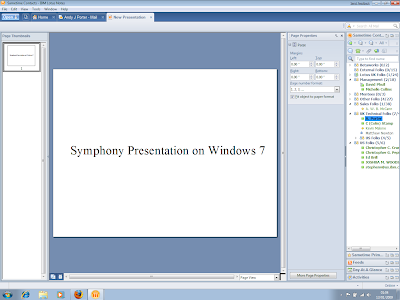 Update: The first version of Lotus Notes that officially supports Windows 7 is release 8.5.1 Fixpack 1. See Here
Posted by Mr Ports at 1:05 am

Glad to see you got it working. I installed Lotus Notes 8.5 on Windows 7 and it won't let me into my mail file. I guess since you have it working I'll have to go back with the notion that it was a bad install or something.

Good to read about your 7 experiences. Now we gotta get you a copy of O14. :)

I've installed Notes 8.01 on Win 7 beta and it gives me an error immediately upon launching referring to "Shared memory from a previous Notes/Domino run has been detected". Any ideas?

Was able to get 8.0.2 and that installed and is running just fine.
Thanks.

@Kreapr: I got the same error. Turned out, Notes doesn't use the same .exe file to start as it does to run. (notes.exe vs. notes2w.exe) When I got it up and running, I pinned the program icon to the taskbar, which turned out to be the notes2w.exe process, and Notes subsequently gave me that error message when I tried to start it from there. Pinning the shurtcut Notes put on the desktop (which points to notes.exe) solved the problem, but it is just a static shortcut. When Notes starts, it of course starts the notes2w.exe process, which is given its own icon on the taskbar, it does not merge with the pinned shortcut. Mr Ports, I hope you would suggest to the development team to do something about that... :-)

In other news, I have major problems with Notes 8.0.1 (Norwegian btw. Not shure if 8.5 exist in Norwegian yet.) on Win7 32-bit. It seems to have a memory leak, as often the Notes client itself and sometimes also Sametime locks up, and I have to kill it in Task Manager. Last time, notes2w.exe had consumed over 650 MB of RAM. All I had up were Sametime, my workspace, my sent-folder and a contacts database we use for external addresses. After that, it won't start again before I take a reboot.

Sorry for any misspellings, english is not my first language... ;-)

Unfortunately, I was not successful with installing Notes 8.5 (in case of both the basic client and the Eclipse client) on Win7. I use a "fresh" Win7 installation (within a Sun VirtualBox VM). At the end of the installation processes an error occurs concerning "registering services" (a problem with wsnd??). Does anybody know what that mean or could give me a hint?

Lotus 8.5 has been running great except when dealing with external non-lotus emails. Anything from external addresses will cause notes to hang for minutes before even loading the message.

I have been running Notes 8.5 with Win 7 RC. Experienced the problem with external emails taking forever (around a minute) to open. The problem went away (I don't know why), but when Notes 8.5 was reinstalled the problem has reappeared. Installed Notes FP1 today which did not fix the problem. VERY AGGRAVATING!

Tried Lotus Notes 8.5 on build 7100 - using all compatibility options and right on the first Lotus Noted Install screen it says the install was interrupted and closes out. Anyone experience this?

Windows vista does not work well with a thinkpad. You definitely need to go to windows xp. There is definitely no other options to go with here. storage and moving blog