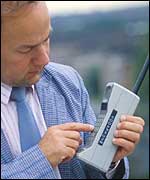 One of the things which is nice about getting a bit older is seeing some things getting a little bit better. For example guitar tuners used to be horrible fiddly things with needles that only ever worked in absolute silence, whilst now you can get a fine Boss TU-2 tuner effect pedal that allows you to tune up on stage whilst a full band is playing beside you. You see - just a bit better. Another example might be cars. They just work better and a bit more comfortably than they ever used to. I guess geeky gadgets also fall into this realm. I shudder to think of my first mobile phone compared to my current slinky number which would certainly not disappoint Captain Kirk (well, except when he tried to teleport somewhere). 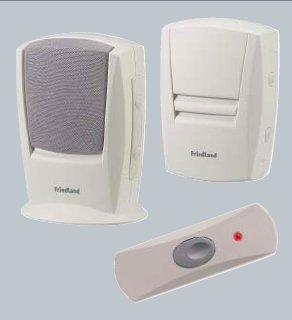 But the thing that has had me glowing with unexpected pleasure this week is our new door bell. I kid you not. Our old door bell was so rubbish it is a bit of a mystery why we put up with it so long. You needed the ears of a hound dog to hear it any distance from the door and the battery would suddenly fail with absolutely no warning leaving fuming guests waiting outside in the rain while Ali and I would continue watching television unawares (a problem often resolved by mobile phones!).

The last time the batteries gave out I couldn't bring myself to change them. It just didn't deserve it. But I was worried about how to install a replacement. I had visions of wiring diagrams and drilling holes through the front door. Had I only heard of Friedland I would have done it years ago. In the box you get a door bell that attaches to the door using a supplied stick pad. No screws here. Then the main alarm is pushed into any spare power socket. No batteries to run out here. And there is an extra portable chime which you can put in the garden or upstairs. All connected via the power of wireless. And you know what - it just works. No faff, no fuss. Out of the box to installed and running in less than five minutes. That's better.
Posted by Mr Ports at 9:09 am

How is the push button powered? Surely it needs batteries?

Ben - a very fair question. The Push does indeed need a CR3032 Lithium Coincell Battery (included incidentally). I guess the difference is that the push will flash the LED light when it feels the battery is getting low. So at least you have a clue that it is going. Hopefully that won't be for as while! With my previous Bell it was always the bell/chime part that lost power and that is what is now mains powered.