Ever been asked a really stupid question which has prompted you to suggest that the questioner might like to consult the supplied documentation? Sometimes less politely referred to as RTFM. Well I have pretty much stolen this whole post from Julian Robichaux because I thought it was so fantastic.. In the new world of the web, stupid questions should be greeted by JFGI. 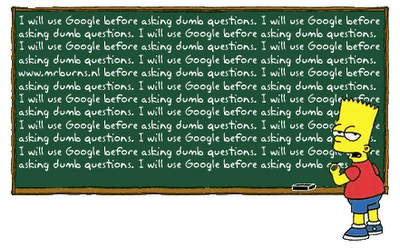 If you're interested, using Frak in place of the more robust alternative as in the title is stolen from the excellent new series of Battlestar Galactica
Posted by Mr Ports at 10:26 pm

What works even better is a nail biting treatement, something like Sally Hansen nail biter, but this is more expensive than the bitter bite.
msc dissertation

Nice stuff of your post. It will be helpful for those people who really want that thing.
automatic social media posting