There has been quite a lot of fuss in the US recently because their daylight saving rules recently changed. This will potentially cause quite a few problems in older software when the time is suddenly an hour wrong. I used to work in IT support and users used to scream blue murder over far more mundane matters. However, I'm glad the I wasn't the support guy who took the call from these chaps as reported in this Slashdot story. 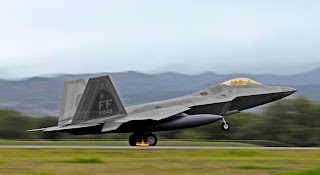 "The new US stealth fighter, the F-22 Raptor, was deployed for the first time to Asia earlier this month. On Feb. 11, twelve Raptors flying from Hawaii to Japan were forced to turn back when a software glitch crashed all of the F-22s' on-board computers as they crossed the international date line.[...] CNN television reported that every fighter completely lost all navigation and communications when they crossed the international date line. They reportedly had to turn around and follow their tankers by visual contact back to Hawaii. According to the CNN story, if they had not been with their tankers, or the weather had been bad, this would have been serious."
Posted by Mr Ports at 4:27 pm

Email ThisBlogThis!Share to TwitterShare to FacebookShare to Pinterest
Labels: software