I got a phone call from my best pal Matt a few days ago. He said "I'm sorry I can't come round tonight - I'm on Richard and Judy." For the few people who don't know, Richard and Judy are a bickering married couple who have risen to national treasure status on the back of their daytime and early evening cheesy chat shows. Matt making an apperence on their show was, to put it mildly, unexpected.

However, it turns out that the invitation came becasue of Matt's long involvement in the Domesday Online project with his Dad, Prof. John. (Incidentally trivia fans, you should refer to Domesday Book and not The Doomsday Book). Channel five is not noted for it's coverage of medievil history so it was very refreshing to see a piece that was both interesting and educational. 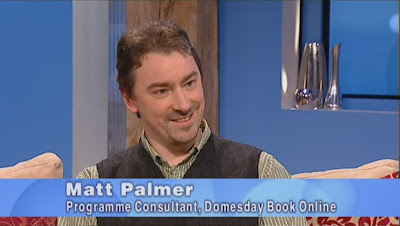 It was also very nice that Matt gave such a brilliant performance given how potentially nervous one could get appearing on live national TV. Although I'm pretty sure that he is still wearing the makup. 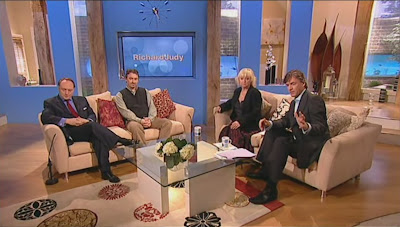