Trip to the Dentist

When I stopped smoking there was a rather unexpected result. I found that every time I brushed my teeth they started bleeding heavily. After a couple of months of hoping it would stop I figured I should go to the dentist. Mt dentist explained that one of the noxious effects of smoking is that it reduced the blood flow to the gums, meaning that you cannot tell if you have gum problems and hence don't go to the dentist to have them fixed. Basically it just means plaque builds up and irritates the gum that allows bacteria to build up and makes them bleed. A quick trip to the hygienist should clear everything up she said.

She made it sound so fluffy that I actually believed that this is what a hygienist is like. 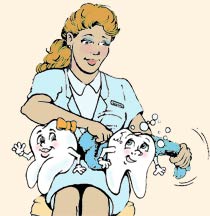 However, I was subjected to hideous torture. Where my Dentist would apologise profusely when she caused me to wince with pain, my Hygienist seemed to thrive on it. She actually said (in a eastern European accent), "Sorry if you felt pain, but you needed hurting so I gave you pain". 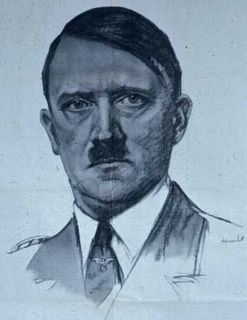 I really wouldn't have been surprised if she had said, "For you Tommy, zee war is over".

Obviously I'm not seriously comparing her to Hitler. It's just a lazy joke. But it is interesting reading Godwin's Law about how any debate will eventually result in rhetorical overreach. Of which I'm clearly guilty here. But it did bloody hurt and she really did say that :(
Posted by Mr Ports at 9:39 pm