Because I work for a software company and am a bit of a geek I install software programs a lot. In fact pretty much every day I will be installing a new build of Lotus Notes or trying out some obscure utility or program. However the arrival of my new Thinkpad has caused me to install or reinstall loads of stuff. Because we live in a world of many languages most software will give you the opportunity to specify which one you want to use. Brilliant. Sometimes they even go to the trouble of specifying different national variation in a language so for example you might be able to choose between French (Fr) for the French or French (Cn) for the French Canadians. Vive la Difference. 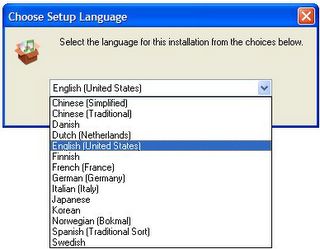 But what makes me incandescent with rage is when the default language specified is English (US) but there are no other English options. This occurs in way too many programs. The above example is from the evil iTunes. Now don't get me wrong, I have no objection to there being a US version of English. I have read Bill Bryson's excellent book Made in America which analyses the etymology of American English and also that it isn't just a poor mans version of English English but is a perfectly valid derivative. But the point remains, American English is not the only version of English. In fact there is a version from a quaint little country called England which has some claim to ownership prior to the States. Some Canadians just aboot speak English. Our criminal cousins in Australia also have a go as do those in New Zealand along with the Irish (to be sure). So why only offer English (US)? If you are just going to offer one version why no just call it English? It really winds me up having to state that I'm a Yank to install some software. The latest software to do this to me is the otherwise excellent Open Office which offers Welsh and Esperanto yet no English (UK)!
Posted by Mr Ports at 5:41 pm

Ah, excellent. And I thought it was just me. Although I'd resigned myself to being silent and putting up with it, but as a matter of protest, I always click on the dropdown list, make sure there's no English (UK) listed and give an obligatory tut.

I too am annoyed by 'English (US)', but the one that REALLY gets me is having to state my COUNTRY of origin as 'United Kingdom'.

I ain't 'anti-kingdom', but it would just be SOOOOOOO nice to, for once, be able to enter my country of origin as 'England'. It's even the same for official forms !

Who maintains this list of country's and how do we get Scotland, Wales, England & Northern Ireland on to them ?!!?!

It must confuse any statistics which people run from this data, not being able to pin-point a user down to the actual country they live in ?

They probably don't do anything with the data. It's probably there purely to annoy you, me and Ports :)

Worse than that is when there's not even a UK option, but they include "Great Britain" and therefore completely exclude Northern Ireland. I'm English. You can imagine my rage if I were actually from Belfast ...