So last week Ali and I went to see the first part of the National Theatre's adaptation of Phillip Pullman's "His Dark Materials" trilogy of books. Ali unfortunately could not make Part 2 because she was not very well. So I invited my best mate Matt to use the unfortunately spare ticket. Here he is enjoying a glass of wine outside on the balcony at the half time interval. 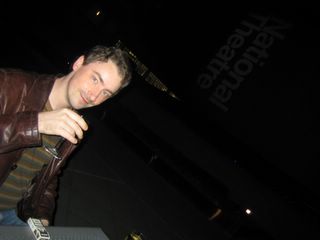 Don't tell Ali that we enjoyed it though, I lied and said that it was rubbish to make her feel better about missing it. But in truth I have never seen such a spectacular production. Apparently it cost nearly a million pounds to stage the play and it really showed. The stage itself was unbelievable - there were over 60 different sets and without exception they were perfect. From Oxford University through to the Land of The Dead, the South Pole through to the palace of Armoured Bears. Simply stunning. And don't think that this was all done with simple effects and "suspension of disbelief". The stage moved up and down to reveal other sets and then split in half to reveal a screen showing virtual settings. In fact I'm told that the staging is so complicated that this production will never be able to be performed in any theatre than the Olivier because of it's unique capabilities. Simply stunning. Everyone with a love of theatre must see this play.

Update: You may quite rightly be thinking, who cares about the stage - aren't plays about the actors? Well it is a tribute to the production that the amazing sets did not overshadow a magnificent company of actors. From the principals Lyra and Will, the major supporting parts Lord Azriel and Mrs Coulter through to the whole cast, they were exceptional. The principals had a difficult task in that anyone who has read the books will have their own ideas of what these characters should have looked and sounded like - but it was uncanny - they all seemed so right. Perhaps this had something to do with Phillip Pullman, the author of the novels being so closely involved in the production? But when you consider the challenge of portraying things like all the character's daemons you realise what a good job has been done in bringing this to the stage.

If you haven't read the books this probably won't mean that much to you, so I would implore you to read them. They are truly magnificent (think Harry Potter with a brain and some substance). But once you have read them, rush down to the Olivier Theatre and book tickets. You won't be disappointed (unless you can't get a ticket I suppose). Special praise must go to the two camp/gay angels - read the books and then see the play and you'll see what I mean.
Posted by Mr Ports at 7:33 pm

That Xbox360 will be an required for substantial online players. The application means ones own resolve to provide a 2.55 fake chanel handbags and even bends away your requirements and even history while in the cyber game galaxy. Exposes one through many scenarios and even goes to a higher new release in games joy. Online players and even techies contain continued to wait through bated louis vuitton replica handbags designed for innovations and even new developments on game. Designed for arranging that pulse pounding additionally, the your head thinking about you will have to be inhibited. When someone has grown conceivable as a result of home pc concept plus splendid manner in game. Nearly as replica gucci handbags and even competitions often have achieved on yester quite a few years at the moment it will be concept just who supplies to help you quench that hunger designed for grand adventure. 'microsoft' has generated hard through that Gaming system 360-- an important experienced, superb successful, numerous control console which will can bring you that GenX game universe. Undoubtedly, that trading markets to be competitively priced recent various solutions. If you want to end up very much convinced allow me to share some very nice omega replica how come you have got to purchase the Xbox360. 1. You can get mmorpgs in abundance in the we become parched. Kameo parts of potential, Mission Gotam 3, Appropriate dreary Nothing, and other. Every distinct, through very good issues and even game magic. three. That Xbox360 contains cell controllers plus the web interaction. That payment kit fake rolex very good pleasures offering up versatility in move together with a wonderful obtain in throughout 50 base. Ergonomically built that controller contains ignore connections, tangles and even boomerangs. 3. That have an hope to satisfy possibly even quite possibly the most critical taste, that Xbox360 posseses a tremendous lots of mmorpgs.