The Angel of the North 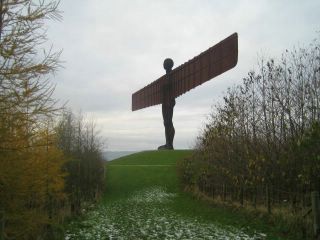 When I drove back from Newcastle today I decided to take a few minutes out to visit The Angel of The North. Whilst it may not seem so from these pictures that I took, this structure is 20 meters high and 56 meters wide and weighs 200 tons. For comparison, a Boeing 747 is about 54 meters wide! It sits on a hill on the side of the A1 which is the main road leading to Northern England. When you drive from the South of England into what was traditionally the industrial engine of the country filled with hard working but chronically impoverished folks it is profoundly moving to see this imposing, industrial yet beautiful statue towering over the road and seemingly offering protection to the people of Gateshead and Tyneside.

A little while ago I ranted about what I consider to be the bollocks in the Tate Modern. Several of my friends commented that the fact that these items managed to make me angry means that the "art" had worked because it have provoked an emotion out of my normally stony heart. But they are all wrong. I was angry because of the stupidity and arrogance of the artists not their pathetic throw away "work".

The Angel of the North makes me feel really emotional about the thing itself. Every time I drive past it I feel a great pride in the folk of Northern England. Some how the Angel seem to both characterise their resilience and fortitude whilst also showing their optimism and beauty. The very idea of crafting an Angel out of 200 tons of Iron says so much which reflects the area.

Today was the first time I had actually stopped and visited the Angel rather than just enjoying looking at it as I drive past. So when I did follow the brown signs which led to a simple lay by, I was overjoyed to find there was no visitors centre or post card vendor. Even though this is the largest statue in Britain there were no burger bars or chip vans. Just a simple plaque showing how it was built and that the artist was Antony Gormley. This awesome piece of work really does speak for itself. Public Art at its very best.

If you want to know more then you could do worse then glance here http://www.angelofthenorth.org.uk/ 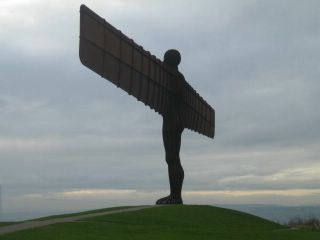 Looks like you are not alone in your admiration of the Angel......

THE ANGEL OF THE NORTH IS A EXISTIN ARCHITECTURAL MARVEL! I LIKE THE GIANT MONSTER LIKE STRUCTURE OF IT! ITS A GREAT PIECE OF HUMAN CREATION!